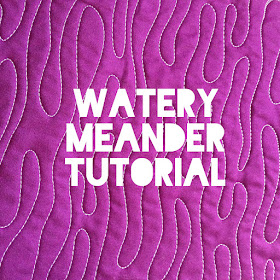 When I started free-motion quilting I really didn't get meandering. I know some of you get it right off the bat but I did not and I say that to encourage those of you who struggle with it also. There is nothing wrong with you!

And also, there is hope for you and meandering. Here is my side door into meandering: watery meandering. Like meandering, it's curvy and it doesn't cross its own line but unlike meandering, this has a direction to it, which makes it a little different; different enough that you're not always asking yourself "Where do I go? Where do I go?" The pattern nudges you in the right direction while still letting you practice filling up your space randomly.  Once you're in a flow with this one, adjusting to directionless meandering feels easier. At least, that's how it worked for me and how I see it working with some of my students. 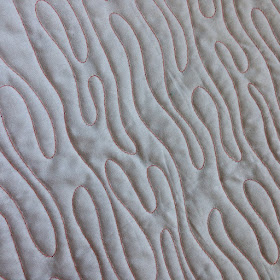 So with a watery meander you start with a sort of wavy line, then make a turn and come back up.
Then do that over and over, varying how long your lines are and which way you turn, filling in the space bit by bit, up and down, back and forth. You don't have to worry when there is an open space, you can fill it in when you go back by that area the next time.

Here is a video of me stitching it on my home machine. You should watch if you're not sure how to go about filling in the space.

What is great about the watery meander is that it is so adaptable. Put an occasional spiral in it and it looks like more turbulent water. Use points instead of curves where you change direction and it looks like fire. Make your wavy lines kind of bumpy and close and it looks like woodgrain. So taking the time to understand this pattern really unlocks several patterns for you. I call these patterns "Stretchy Meandering" and there is a whole section of them in the designs chapter of First Steps to Free-Motion Quilting if you want some ideas. 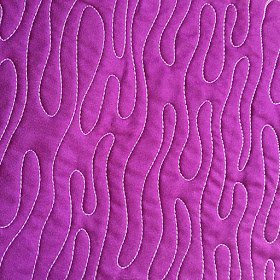 I'm sorry my FMQ weekly got lost for too long. I went back to shoot another class for Craftsy (!!) and then it was the end of March. I always think I'll do better with keeping everything else going when a big project comes along, but it never actually goes that way! In penance I made that cool graphic at the top of this tutorial. And I'll be back next week... probably!
Christina at 12:53 PM

I'm glad you're back! I seem to have a harder time with the watery meander than the regular kind - I find myself needing to make a big dip down or up. I saw how you did a wavy line up - that's a good idea.

Glad you're home Christina! I was wondering how you were doing and hope your shoot went great!
Really nice video on the stretchy meander!

Beautiful quilting! Thank you for taking the time to make a video and show how you do it!
I took a class at Nancy's last Saturday and going in today to work on a small quilt ~ not sure if long arm quilting is for me. Feel even more out of control with it than on my machine!

I love this watery meander. Congratulations on filming another Craftsy class! Lucky us! Your tutorials are the best.
I know how it is to lose time. March was lost to the flu for me - and then busy trying to catch up this last week, finally feeling the old energy return. I swear that after taxes, i will MAKE room for some art and quilting, no matter what!

I've missed your posts... what's this about a new Craftsy class? What is it called, when will it be available?!? :) I found meandering really tough when I first was learning FMQ also. Loopy Line was a lot easier for me. I like the watery version of meandering - I have your books and used it on one of my little baskets that I made from your pattern.

I haven't tried FMQ yet... maybe soon. This looks fun!

Since I finished your class, I now follow you in your blog and instsagram.Congrats on your new book. I know that required your heart and soul. Enjoyed your Craftsy class.in fact finishing a quilt in one of your designs.

Hi Christina,
I've taken your free motion class from Craftsy; also bought your book and just dumb found your blog today, how exciting. Thanks for your tutorials, can't wait to apply some designs on my quilts. By the way, I've subscribed your blog.

What kind of foot is that? I haven't seen one like that?

I love reading your comments, thank you for coming by!